A brief history of money, amazing currency facts and your cheat sheet to all things currency related

As you may already know, Foreign Currency and Coin Exchange is your one stop shop for all things currency related. From selling to buying your foreign currency, within our online currency marketplace, you can search through over 130 currencies to fulfill your needs. Whether you are looking into selling leftover currency lying around after a trip or buying what you need for your upcoming trip, you can do both transactions here safely. Foreign currency is a fascinating world, which is why we wanted to give you a little bit of context. Read on and find out more about currency history and amazing facts!

The history of money

To talk about the history of money is to talk about human history as well. Throughout history, humans started bartering or trading goods in order to fulfill their needs. While a formal system was years ahead, the emergence of money is thought to have come about when in different ancient cultures began using commodity money or objects with assigned unit value, as a medium of exchange. Out of necessity, the direct trade of goods evolved into the first forms of prehistoric currencies over 3,000 years ago. This in turn gave place to the use of credit and debt, or the origin of a large-scale commodity economies in Mesopotamia.

The origin of currency

Growing in complexity, these commodity money economies soon outgrew their scope. This meant the origin of standardized coinage around 600 B.C. in Lydia (what is now Turkey). Here, the first coins were minted using a mixture of metals and stamped designs in place for denominations. From this, the use of metals as a form of currency expanded throughout Europe and was used for centuries forward. Precious metals like gold and silver have, throughout history, been the most popular forms of money used.

While coinage was spreading through Europe, paper money was first used in China around 700 B.C. What started as merchant receipts, soon gave place to banknotes, that were used alongside coins for centuries. Banknotes, like the name suggests, were issued by banks and could be traded at face value for coins. Until the 16th century, Europeans relied heavily on coins, supported by colonial supply of precious metals. The first government issued banknotes or bills were introduced in Europe around the 17th century to aid in the colonial expansion in America.

Though the move to paper money took centuries, when it actually occurred, the world was transformed. International trade became widespread and the currency market was created. This meant a whole new market to trade and speculate for, with varying values of currencies attached to government stability and a country’s buying power.

This international currency market is the foreign exchange market, known as Forex or FX, and it is a global marketplace for exchanging currencies. It is the largest financial market in the world and provides a platform for buying, selling, exchanging and speculation of currencies.

Here are some interesting facts of the currency market today via brokernotes and biz.org:

Want to know more about the abbreviations above? These are the ISO currency codes. Assigned by the International Organization for Standards (ISO), they are a three-letter alphabetic code and three-digit numeric code that identify a unit of currency and country of issue.

Some of the most popular ones probably require no introduction, like USD for the US Dollar or EUR for the Euro. However, there is an ISO currency code for each of the currencies of the world. Find all you need to know in out ISO Currency Code Cheat Sheet here:

The ISO currency code is not to be confused with the currency symbol; these are the graphic symbols used to reference amounts of money in a specified currency. Some of the most popular currency symbols are:

What may be known as the dollar sign or $, is also the currency sign for other currencies other than the US Dollar. In fact, it is also the symbol for:

More so, the same symbol is also the one used for pesos in several countries, including:

Finally, in many cases the subdivision of some of these currencies uses the cent or centavo symbol, ¢ to denote centesimal divisions of the currency.

Other very commonly used and known currency symbols include:

The € for the Euro, the currency of most of the European Union member states.

The £ for not only the British Pound or pound sterling, but also, the Alderney, Falkland Islands, Gibraltar, Guernsey, Jersey, Manx, Saint Helena and Egyptian Pounds.

The ¥ for both the Japanese Yen and the Chinese Yuan.

Want to go into specifics of some of the most traded and interesting currencies in our site? We’ve worked on bringing you the facts. Click on the links to access the posts and learn more about these currencies:

Fun facts on foreign currencies that you probably didn’t know

Since we’ve gone over the history of money and learned about the foreign currency world, we wanted to include some interesting facts to teach us a little more about this fascinating subject. There is no doubt money is part of modern culture, and as such there are some amazing facts that we sum up here:

Why us: Foreign Currency and Coin Exchange

Our company is a safe, trusted and reliable platform where you can sell foreign currency, foreign coins, stamps and gift cards for cash. We offer the opportunity to cash in those old banknotes and coins laying around your drawer. And the best part? Our simple process. To start exchanging, start by going through our complete list here and simply scroll to the country that you have and click on it. You will be directed to a page with photos of all the banknotes and coins that we buy from that country. Our rates are built into each item. Type in how many you have of each banknote and coin and then add each item to your sales wallet. Your sales wallet will keep a running total of how much you will receive in payment from us. 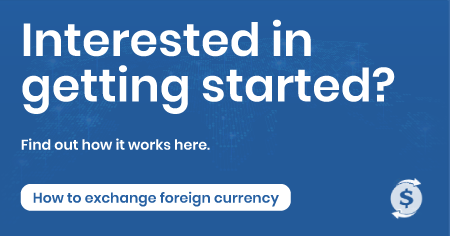 Our goal is to provide a safe, trusted, and reliable platform for those wanting to sell their unused foreign currency.

If you are looking for software, apps, and or branding... check out our sister company Deep Root Digital